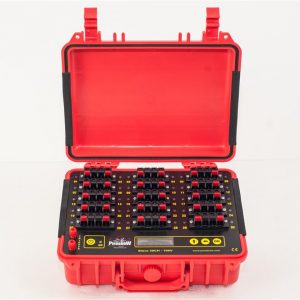 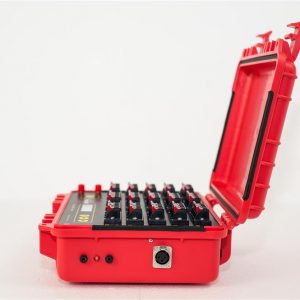 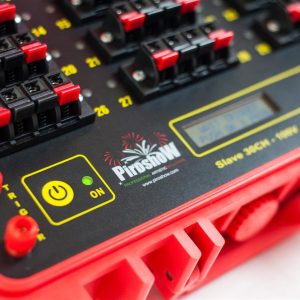 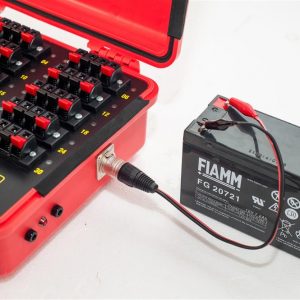 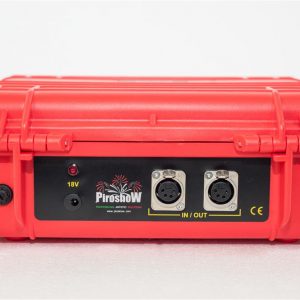 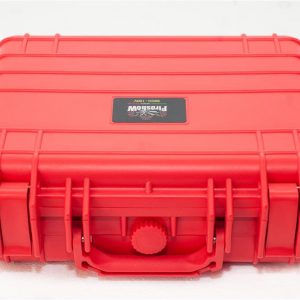 The 30CH100V unit is the central module of the Piroshow system. It can be used for lighting portions of shows, as a sequencer for performing pyrotechnic choreography and as a unit for managing solenoid valves (flames).
By choosing to purchase the SUPERSLAVE version (€ 990 + VAT), the module will also be equipped with a side output to directly power up to 15 modules without an internal battery (SmartSlave, MicroSmartSlave and FastSlave).
Delivery within 15 days, ask to learn about the possible immediate availability. Charger optional.

The  Slave 30CH can be set in a constant, accelerated, decelerated and programmed sequence.
Creating a sequence and running it is very simple: firstly, you must create the sequence on the Slave, then connect the Slave to the Master (via cable or via RadioModem), select the line that identifies the Slave and the relative sequence, set the TRIGGER as the ignition channel and finally FIRE! The whole sequence will be executed with a single impulse. By connecting several Slaves together, you can execute a sequence with an “unlimited” number of ignitions!

Each 30CH100V module has 30 independent channels equipped with strong anti-tearing terminals within which secure the lead for the igniter. The high voltage allows you to connect in each channel up 50 igniters in series, thus achieving the amazing number of 1500 ignitions per unit!

Slave 30CH100V is the quintessence of the most advanced electronic technology and the highest quality construction. Wide flexibility, scalability with the entire Piroshow system, ease of use, precision shooting, make the 30CH100V unit the perfect tool for the most demanding pyrotechnic.

The electronic circuit of the 30CH-100V module is an exclusive Piroshow project that continues to be renewed periodically to meet the needs of pyrotechnicians in continuous evolution:

Safety remains the most important guarantee of Piroshow products and the new Slave exceeds expectations!

On the front panel the bipolar switch has been replaced with a button. This avoids that grains of dust or sand can go inside the Slave and alter the functioning of the circuit.

Slave 30CH-100V is also equipped with an internal rechargeable battery with long autonomy which, from 30h – 60h in stand-by mode, changes to 60h-100h in stand-by mode, making the module suitable for offering power to any modules without the battery of the Piroshow system (MicroSmartSlave, SmartSlave e FastSlave).

The suitcase for housing and transportation is extremely sturdy, according to standards that could be called “military”, waterproof and weatherproof, sealed with rubber slits for the output ignition wires and valve to control the internal pressure. Ensures maximum reliability under all conditions of use and a long durability even at increased use.

Are usually called “slaves” modules that, on the one hand, are directly connected to the fireworks (via the wire and its lighter) and allow you to fire them independently, on the other, are capable of expressing the maximum of their potential when they are centrally controlled by a module called “Master”.

It can be connected via RS485 cable to other 30CH100V modules or to Master modules. The connection can also be via radiomodem RTX 500mW, in order to achieve a completely wireless system.

In turn, up to 15 Piroshow modules without internal battery can be connected to the Slave in the new SUPERSLAVE version, such as SmartSlave, MicroSmartSlave and FastSlave.
The connection between these modules is made through the side output with which only the SuperSlave is equipped and extends to the other modules with a common electric cable.
This makes the system more versatile and practical.

When connected to a master module (FullPower, Full), the controller 30CH100V left in power saving mode (standby) can be reactivated (wake up) directly from the master.
This, combined with long range power, allows you to place modules 30CH100V well in advance of the start time of the show, thus facilitating the work of the pyrotechnician.

The 30CH-100V control unit guarantees maximum flexibility of use. In fact, it can be used as: autonomous ignition unit, sequencer, solenoid valve management unit (flames) and remote unit, controlled directly by a Master module.

Autonomous power unit : Trigger option. With its 30 firing channels our control unit is perfect for the remote electronic ignition of firework shows of small and medium size. Simply select the channel to fire and press the OK button. The line tester allows the pyrotechnic to test before the show the correctness of each link.

Sequencer : 30CH100V is designed to simplify the design and setting of choreographic sequences and / or firing . The four possibilities of sequencial firing, CONSTANT, ACCELERATED, DECELERATED and PROGRAMMED, require only the indication of the number of channels to use and of time interval between a switch and the next. The option SIMULATED SEQUENCE, through the LEDs and audible beeps, ease the programming.

Management unit of the solenoid valves (fire) : solenoid valves are highly suggestive component in firework shows. Unlike other manufacturers modules, which, connected to the valves, only allow the standard power, the slave unit 30CH100V by Piroshow allows total management of the solenoid, being able to determine the times of opening and then check intensity, amplitude and duration of flame!

Remote unit : in the case of shows rich in choreographies or large and very large shows, 30CH100V control units can be operated up to 256!, centrally from our Master unit (Master FullPower, Master Full or Master Manual). In this case, the 30CH100V are used remotely. For each slave the pyrotechnician will assign an identity and a power setting which will then be called in fully automatic or manual mode. 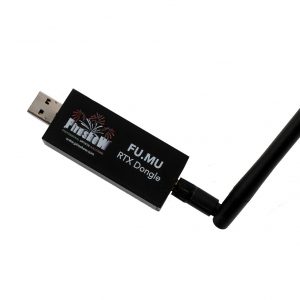 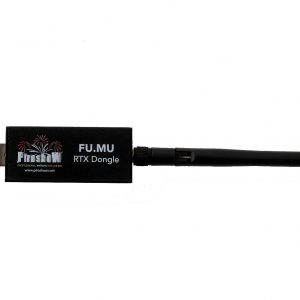 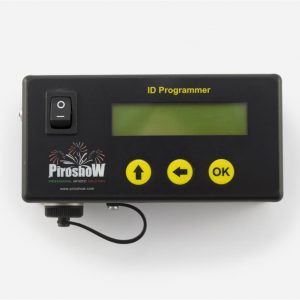 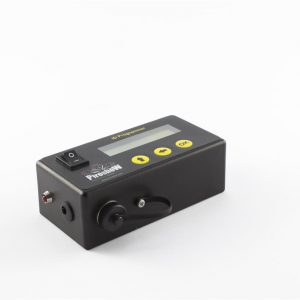 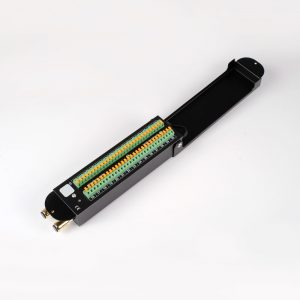 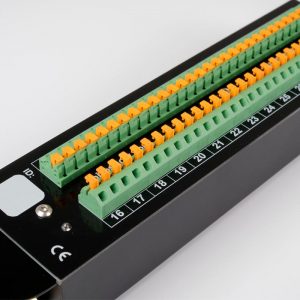 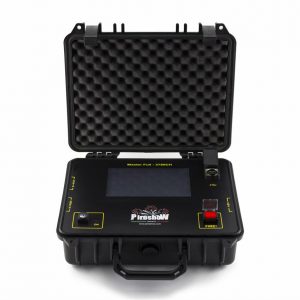 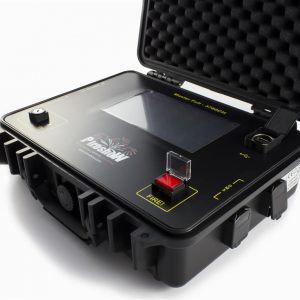 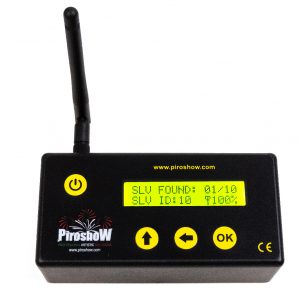 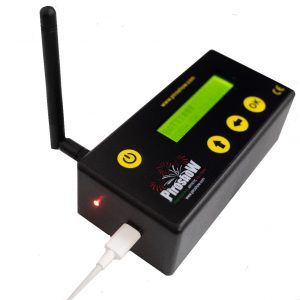 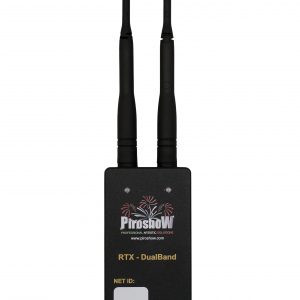 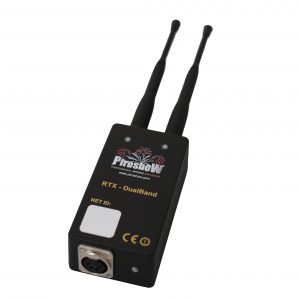 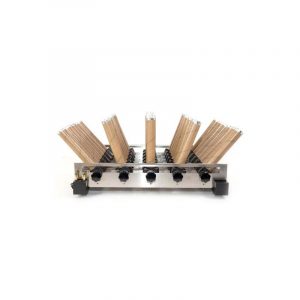 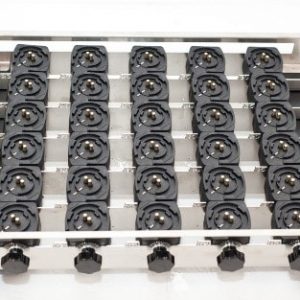 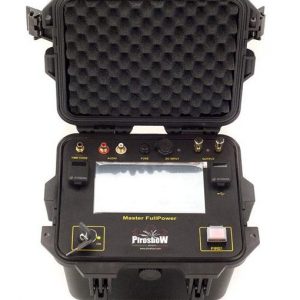 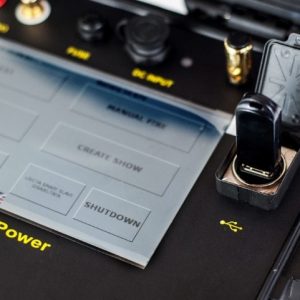